Psalm Unu (1): Blessed is the one who walks with God. 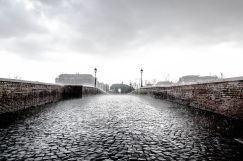 Early during the week, Virginia, the director of the orphanage, took us to a government orphanage to meet the director and some of the children. She brought donations of clothing, baby formula, and other items as gifts.  This was a sad and stirring occasion; in several rooms, there were children of various ages from birth to about age 5 that were in the custody of the state.

This was an odd situation for us; we felt grief as we were looking at the babies and children much like the way you would select a puppy from a litter.  It didn’t feel right, and yet all of these children needed a home.  The worker would hand us a child to hold and then through an interpreter tell the name and explain the situation.  It was heartbreaking to think this was someone’s child and I was holding him or her as though they were mine to keep, or not!   We had so many mixed emotions and could see later why the “system” has boundaries to avoid this type of interaction.

Some of the children were held in legal limbo, in a sense.  The law allowed that if the biological mother came to see the child within a 6 month period, they could not legally label the child abandoned and place them for adoption.  Such was the case with Loredana.  Dale fell in love with her immediately but was soon informed that she was unavailable.  Her eyes, her face, epitomized a beautiful little girl who so needed a Mom and Dad.  We wept as we left.

You cannot adopt these

We made the most of our mornings spending time with the children or staff at Hand of Help.  There were a few around, however, that could manage enough English to converse.  We especially liked the staff nurse, Florica, who tended to matters with the children.  Florica was a beaming, beautiful single woman who loved the Lord and the children — it was obvious in her manner with them and us.  She would become an important person to us before our time was finished there.

As our week further progressed, four children began to emerge as special to us, three actually, two sisters and their brother.  The youngest child, a girl, was kept with the preschool children and so we did not see her until some time later.  Dale began to take interest in this sibling group and soon wanted to know their story.  Upon inquiry, he was reminded by the director that we were not to look at any of these children as candidates for adoption as they were off limits and not available for adoption.

She went on to explain that none of the children at Hand of Help were available for adoption.  The system only allowed for those children in public/government institutions to be adopted.  She mentioned that many of the children at HOH were not true orphans, meaning without parents; but rather the parents were in unfortunate situations where they were unable to provide for their children, and had left them with her for care until they were able to take them back again.

In spite of their cautionary warning, Dale felt something special toward this sibling group.  Anca, the eldest, was very thin and small, yet assumed a very confident and somewhat bold manner for her size.  She was hanging around Dale a lot and acting a bit like she had done this before with visitors.  Her sister, Carmen, was a bit more reserved, even shy, yet she did not want to be left out of any fun.  And then there was Andre, the boy.  I say “the boy” because Dale knew that when we located the children we were hoping to adopt, there had to be a boy.

Dale and I had been married 17 years at this point and once we decided to adopt children, we agreed that we wanted to have at least two children join our family immediately; therefore, a group of siblings seemed perfect.  My prayer was to raise whomever we adopted to be servants in God’s Kingdom.

We had fun days with the children.  Soon many “personalities” emerged out of the bunch and we began learning who they were, why they were here, and their story.  This was with the help of some of the older teen workers who knew English, as well as Florica, the nurse.  When Gene observed us asking questions about the children, he would throw in a quick reminder that Virginia said we could not adopt any of the children at her orphanage.

Our Meeting at Buffy’s

After our state-run orphanage visit, we were becoming anxious about Virginia actually helping us meet someone who could possibly help us understand the whole adoption process.  Our first question was, could we adopt children directly without the whole US agency system involved, and number two, would it be possible to locate two children while we were there that were available for adoption.

At the beginning of the following week Virginia said we could meet an attorney she knew who was involved with adoptions.  It took two days of trying to meet at a specified time, to actually secure an appointment with Virginia to do this.  We would go to her restaurant, Buffy’s Pizza, sit there an hour or so waiting for her to show up and after a while, we would finally leave.  The second day she showed up.  We ate pizza and spoke with her attorney friend, Mr. Brinza.  He did not sound optimistic but suggested we go see an agency that could possibly do something for us.  So, after we finished eating, we left to meet someone else in an office some distance away.  The people at the agency gave us a snapshot version of the adoption procedures within the country. After receiving the information they gave us, the possibilities looked slim in attempting to move forward in the unconventional way we had hoped we could.

We could tell by the end of the visit in that distant office, that a rift had come between us and those who had invited us to Hand of Help because of Dale’s persistence concerning the Filip children.  Dale, however, was determined not to leave there without asking them specifically about the adoption procedure concerning these particular children. The day before our scheduled meeting, Dale had said to me that he thought God was leading us to adopt this sibling group. When Virginia heard Dale mentioning the Filip children again she did not want to discuss it at all, but rather moved the discussion back to the adoption of one of the abandoned children that were in the Romanian Adoption Committees (RAC’s) system.  During Dale’s persistent discussion with the person at this office, he asked what the costs would be for four children.  They said it would be about $40,000 to cover the fees.  That figure alone made it seem impossible!  We left their office feeling very discouraged; however, that was nothing in comparison to the feelings we were about to experience.

After much discussion in Romanian, someone from that office agreed to take us to another village about an hour or so away.  As we traveled on we continued to converse with the person we had collected at the office we were leaving.  Since that person also served as an interpreter we were able to ask more questions.  As we traveled we were informed about the place we were headed to in Siret.  It had become an infamous institution through the undercover work of a news agency from America.

Continue to next chapter

This site uses Akismet to reduce spam. Learn how your comment data is processed.

Save with Solar & Giving to Missions

Save with Solar & Giving to Missions